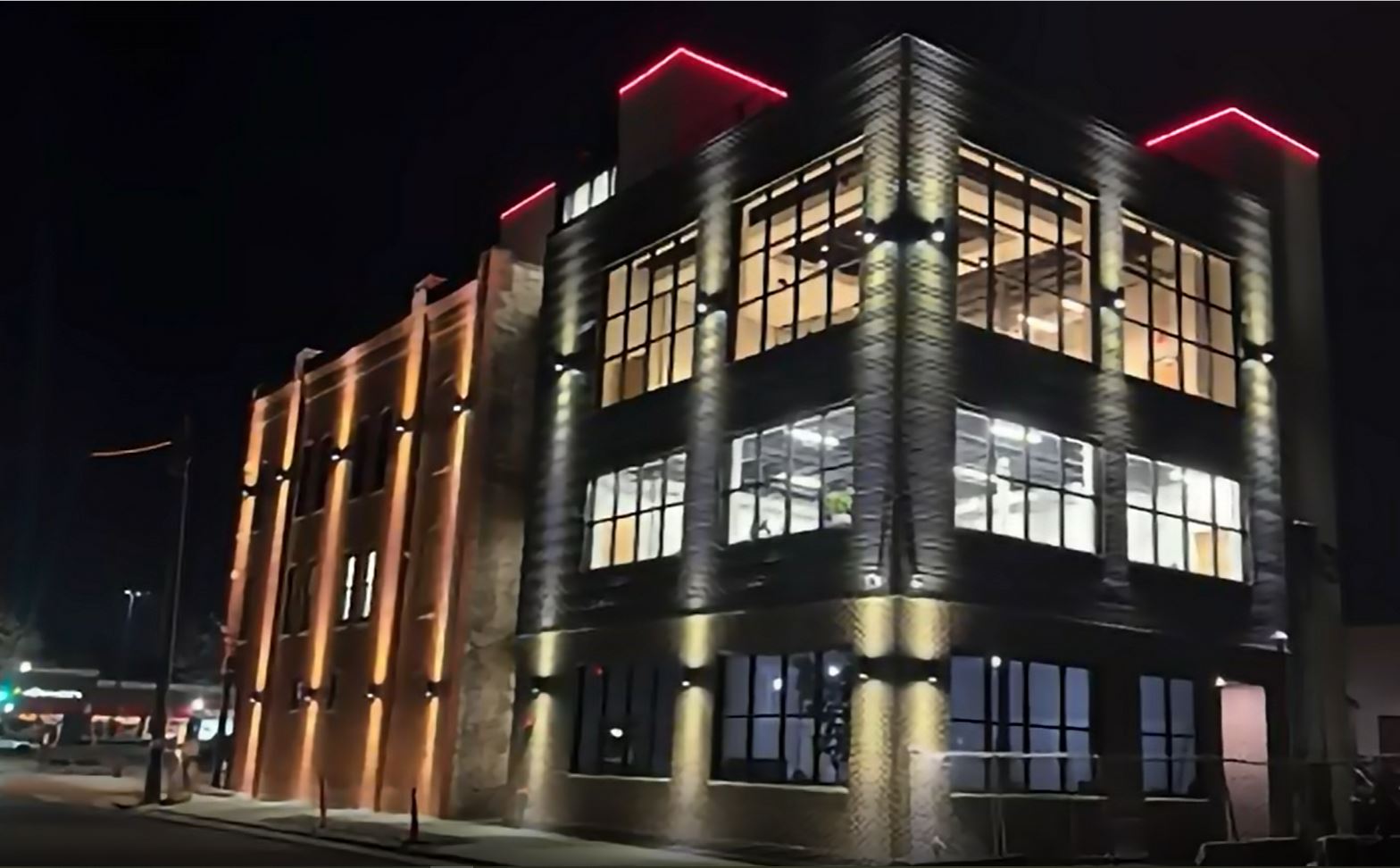 W. Broadway in north Minneapolis has another neighborhood-hanging renovation

On a glorious late October day, dozens gathered atop a rooftop patio on W. Broadway, to celebrate the $7.2 million resurrection and expansion of a long-abandoned building complex along the North Side artery.

The project's developer-contractor, Black-owned Tri-Construction, the Phillips Family Foundation and Urban
Homeworks will be among the enterprises located in the spacious retail-office complex at 927 W. Broadway.

"This building has been renewed," Rabbi Marcia Zimmerman of Temple Israel said during the ceremony. "What is
new is the opportunity and the organizations working tirelessly on enterprise and justice."

This project serves business, city and neighborhood aspirations of facilitating more ownership for people of color
along corridors damaged in the 2020 riots following the police killing of George Floyd.

"The 927 Building is more than a redevelopment project," said Calvin Littlejohn, chief executive and co-founder of
Tri, who started as a laborer at Mortenson Construction. "It's a model of the kind of transformative investment that empowers local business and local communities."

Littlejohn pointed to several nearby developments, including a remodeled Cub store in a bustling shopping center, a housing development by Tim Baylor and partners, the expanding Juxtaposition Arts and Capri Theater. There is $150 million in construction completed, underway or planned in the Broadway corridor.

It's evolving from a "drive-thru to a destination neighborhood," Littlejohn said.

"North Side is no different than Uptown or any other neighborhood. Communities are only as strong as the business sector," he said. "We're not getting pushed out by gentrification. We are part of the North Side leadership. I live here. I worship here. And I'm growing a business here."

The 927 project was more than a decade in the making.

The city, to settle a lawsuit with a former absentee owner of the 130-year-old structure, paid $400,000 to acquire it in 2010. Several renovation plans fell through before partners Tri and the Jay & Rose Phillips Family Foundation
approached the city with a long-term solution.

Because construction costs are no less in lower-income neighborhoods that also command lower market values and rents, traditional lenders and investors are wary. Yet local entrepreneurs often lack the equity to drive deals.

The Phillips Foundation ended up making a $3.5 million equity investment. Tri is making a $500,000-plus
investment, including its developer fee for the project. There are several loans, including $2 million from Sunrise
Banks and $800,000 from the Minneapolis Community Property Development Fund, established for such tough
projects. U.S. Bank, the Minneapolis Foundation, a business-led corridor-rebuild fund and the Metropolitan Council added more than $1 million in loans and grants, according to a financial statement.

Tri-Construction, which was founded in 2001 and employs 54 people, is now minority shareholder of the complex.
Tri's owners plan to acquire the Phillips Foundation's equity within 10 years from rents and the company's
construction profits.

Littlejohn said it was challenging to integrate a dilapidated building with a new addition to create a 19,000-squarefoot functional beauty.

"It would have been cheaper just to tear down the old building," Littlejohn said. "The roof leaked, the floors were
bad. It was uninhabitable — but beautiful. The structure was good. We decided to enhance what we had. We
repaired the interior, including floor joists and floors.''

The foundation sparked the redevelopment plan when it decided to relocate its offices to north Minneapolis. Since 2016, the Phillips Foundation has focused on assisting North Side Minneapolis Public Schools students and
investing in "a thriving local economic ecosystem that creates wealth for Black, Indigenous and communities of
color in north Minneapolis," according to the foundation.

"We are excited to be part of the revitalization of one of the most vibrant communities in Minnesota,'' said Joel
Luedtke, program director at Phillips Foundation.

Luedtke noted the increased level of W. Broadway investment and overcoming the perception and reality of years of disinvestment and crime.

"We're going to lean more into community safety with our neighbors," Luedtke said. "We're aware of the challenges.

"There are many good neighbors and change agents, and we want to make it a more-appealing neighborhood for North Siders and visitors. It's also important that North Siders own as much of the commercial-residential assets as possible."

The Phillips Foundation, which donates about $3 million annually, has an endowment of $55 million. It contracts
with the larger Minneapolis Foundation for administrative services.

The foundation's board is chaired by U.S. Rep. Dean Phillips, grandson of Jay and Rose Phillips, whose parents were Russian-Jewish immigrants and North Side entrepreneurs. 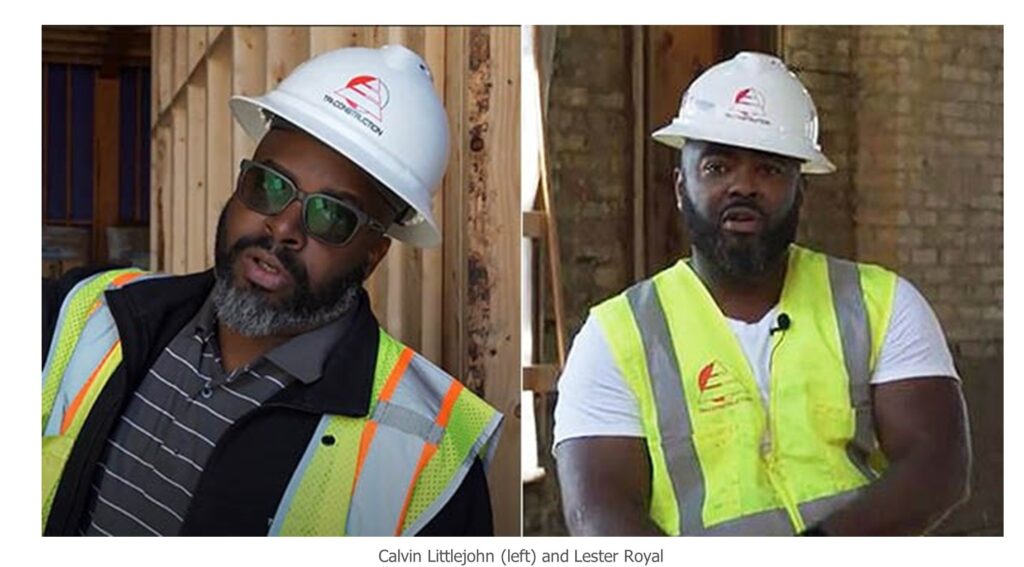 “Two brothers and a truck,” Royal recalls. “And one ladder,” he adds, cracking up himself and Littlejohn, whose attic, with its lone desk, served as their first office.

From those humble beginnings, Littlejohn and Royal have built TRI-Construction into a general contracting firm with close to $14 million in revenue last year and 54 employees.

Their headquarters now is in a building at 927 W. Broadway Ave. in north Minneapolis. TRI-Construction renovated and expanded the 130-year-old building.

The construction company is set to own the structure in 10 years, buying it under a unique partnership with the Jay & Rose Phillips Family Foundation of Minnesota, an effort that seeks to build wealth for local businesses and the broader neighborhood.

The 19,000-square-foot, $7 million project also serves as headquarters for the Phillips Foundation, which will have office space and a rooftop deck available for community groups to reserve for meetings. Other tenants include the city of Minneapolis’ Office of Violence Prevention, the Zen Bin, offering wellness services and fitness classes; and Urban Homeworks, a nonprofit affordable housing developer. The 927 building will feature art from local Black artists and an outdoor plaza that will be built out next year.

“It is a sobering time, a proud moment,” said Littlejohn, TRI-Construction CEO. “To think that two guys who had an idea about how do we create access to opportunity for people who look like us, who are marginalized in the construction realm, who don’t really get the opportunities to grow … and now we’ve got this.”

From handymen to general contractors

Royal, TRI-Construction’s chief operations officer, was a union carpenter and Littlejohn a union laborer when they launched a handyman service in 2001.

It since has grown into a union general contracting company that self-performs construction of drywall assemblies. TRI-Construction partners with big contractors including Mortenson, Watson-Forsberg and J.E. Dunn, Littlejohn said. Projects the company has worked on include Target Center and on stadiums for the Twins, Vikings, Minnesota United FC, St. Paul Saints and University of Minnesota.

“From a business standpoint, there is a need on projects for diverse [contractors],” Littlejohn said. “What matters to Lester and myself is not just that we are a certified Black-owned business, but when you look at TRI-Construction employees, our craftworkers run about 70% diverse. Our management and our office staff, that runs about 80%.”

Royal and Littlejohn live in north Minneapolis and intentionally located TRI-Construction — and its payroll of nearly $6 million last year — there. “It’s important that the community dollars stay in the community,” said Royal, who has two sons working at TRI-Construction. “It’s important to us that we stay rooted, we stay grounded, that we wave a flag and say we’re right here in north Minneapolis and in our community.”

The 927 building, a dilapidated but promising redevelopment target on north Minneapolis’ prime corridor, had long been in the sights of TRI-Construction's founders. The company was attached to the building after helping to price potential development projects “but always an outsider, as a construction company,” Littlejohn said. “There was never really any conversation about us figuring out how to be part of a deal.”

The Phillips’ parents were among Russian Jewish immigrants who settled in north Minneapolis. U.S. Rep. Dean Phillips, a foundation director, said in a video on the foundation website that his great-grandmother Rose was born at 709 Plymouth Ave. N. Her father had bought the building and operated a store there.

“The North Side was our family’s home in the very beginning,” Phillips said in the video, which shows him chatting with Royal and Littlejohn inside the 927 building while construction was underway. “Just because we don’t live here anymore doesn’t mean that our responsibility ends. Our affection for the North Side continues.”

The foundation shifted its focus to north Minneapolis in 2016, Luedtke said, prioritizing supporting public schools there and increasing local commercial ownership opportunities while looking to relocate to the neighborhood.

“‘TRI’ seemed like the perfect partner,” Luedtke said. “It seemed like we were well suited to each other.”

TRI-Construction and the foundation have met weekly since the partnership began in 2018. An opening event for project partners is to take place on Oct. 27, 2022.

“This is not a project that either one of us had done before,” said Jo-Anne Stately, director of impact strategy economic vitality for the Minneapolis Foundation, which provides services to the Phillips Foundation under a “strategic operating partnership” announced last year. “There were certainly a lot of unknowns that were part of the process. But it didn’t stop us.”

A small opening event for project partners is to take place on Oct. 27, Stately said, while a bigger community open house will take place in the spring at the 927 building.

The partnership with TRI-Construction comes as the Phillips Foundation makes grants and investments to support other Black developers in north Minneapolis, Luedtke said, adding, “We would be very interested in having conversations about how we can support those who are doing the heavy lifting of making these development projects happen.”

From TRI-Construction’s new home in the 927 building, Royal and Littlejohn look across the street to what they hope will be their next redevelopment venture, an abandoned building at 1001 West Broadway Ave. TRI-Construction, which is busy the rest of this year and into 2023, also is looking to make key hires and strengthen its organization.

“This is a flagship example of how things could be and should be,” Royal said of the partnership with the Phillips Foundation. “Here’s a way to see how you can take two different generations, two different ethnicities, two different ways of doing business and merge them together for a greater cause.” 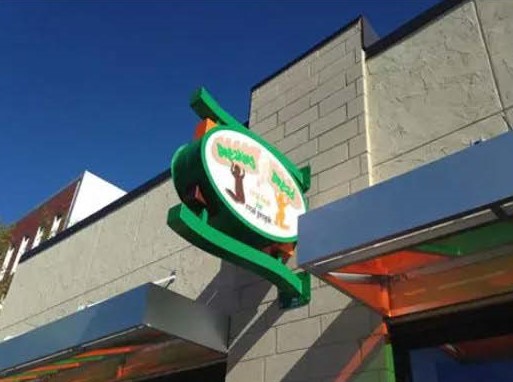 TRI-Construction Partners with Breaking Bread for opening of Cafe in N. Mpls

TRI-Construction had the privilege to serve as the General Contractor for the opening of Breaking Bread Cafe - a North Minneapolis cafe that features healthy, home-style cooking while focused on community involvement. TRI-Construction worked alongside Breaking Bread to help make their dreams come to reality and make a plan from inception into fruition. Stop by and check out the amazing space while enjoying some of North Minneapolis’ best cuisine. 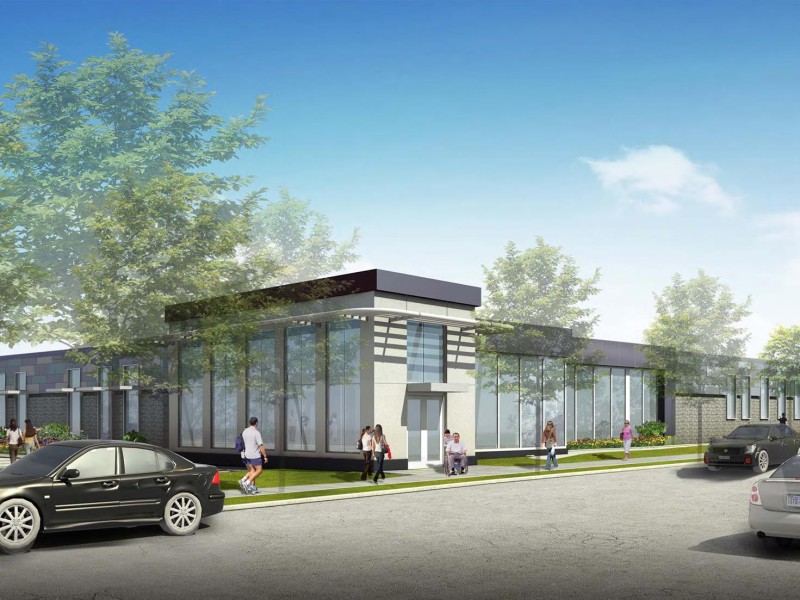 TRI-Construction was awarded the Workforce diversity achievement award for the work done at the Minnesota Twins Stadium. 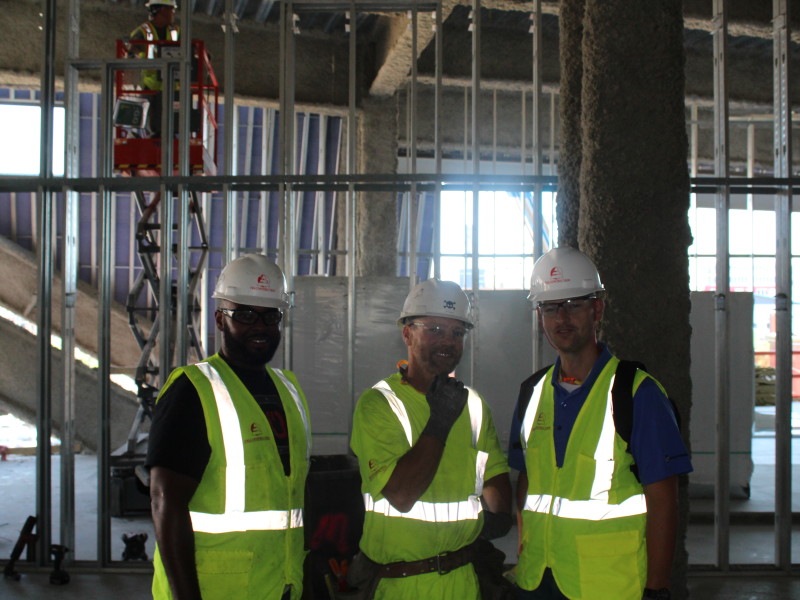 Developing the future minority workforce by delivering on the promise of our core values.

Reaching back and pouring into my community is more than just a thought but action and it starts with my company. It is of great importance that we as a company keep a clear understanding of what it means to empower the future of our community. I have had the privilege to speak to a number of students at Summit Academy OIC in north Minneapolis. The subject matter of this meeting was preparing for business ownership, continuing education and a few motivational highlights of TRI-Construction projects. TRI-Constructions core values and commitment to community, clients and development are key to mentoring a strong workforce. It is exciting and empowering to mentor future minority workers and reinforce the message of importance of continuing education and creating a clear path to success. 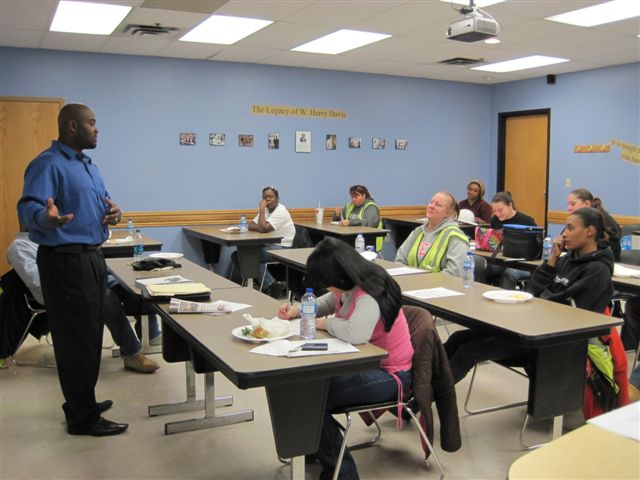