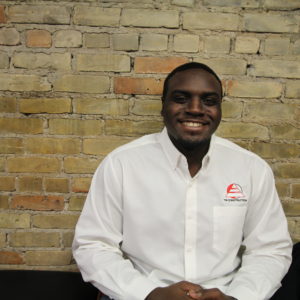 Rodjerick started his interest in the construction industry early on, in high school while taking woodshop and construction method classes at Shakopee High School. After graduating in 2013 Rodjerick, continued his education at Summit Academy OIC as a Pre-Apprentice Carpenter. While gaining knowledge along the way, Rodjerick decided to continue his education in the business side of construction, and now has gained his Bachelor of Science degree in Construction Management from Mankato State by the summer of 2017.

His work experience includes being a laborer at JLM Design and Build Landscape from 2015–2016. Taking on an Internship with TRI-Construction Inc. in early 2017, Roderick’s engagement on all his projects from early design to final project completion, showcased his skills, and gained his role as Assistant Project Manager, Estimator, and Scheduler in late 2017.

^ Sanford Hall – U of M Campus